After winning the top spot in UK talent competition X Factor in 2011, Little Mix has gone from strength to strength, recently releasing their fourth studio album, Glory Days. What's more - they released their own perfume line, an autobiography titled Our World and have an upcoming 2017 global tour, including a stop in little ol' NZ.

The 23-year-old’s got the world in her palm and we can’t wait to see what she does next. Perrie is this week’s Woman Crush Wednesday…

1. She lived in Hamilton, NZ when she was younger
Believe it or not, there was once a time where a young Pez (her nickname!) lived with her family in the 'tron! She spent a few years in the country before moving back to her home town, South Shields, in the UK. Perrie went on to audition for the X Factor in 2011 originally as a soloist.

2. She was born to be a musical star
Perrie’s beautiful name comes from none other than Journey lead singer Steven Perry. When asked how she became a singer, she noted that both of her parents come from musical backgrounds. The talented muso can even add accomplished pianist to her growing resume.

Buzzing that #GloryDays is #1 AGAIN! We'll never get tired of telling you guys how AMAZING you are! ?? Ultimate dream team ?

3. She has no sense of smell
Yes, you read that right - Perrie was born without a sense of smell! This has become quite the hot topic during the band’s promotional interviews for their sweet-smelling perfumes, Gold Magic and Wishmaker. Bandmate Jesy even joked in an interview that Perrie does the worst farts but has no idea as she can’t smell them. Ew.

4. Her style is the real deal
If you’re one of the 5.1 million people that follow Perrie on Instagram, you’ll know her style and stage costumes are the real deal! The songstress kicked things up a notch for Halloween this year, dressing as Poison Ivy one night, only to follow it up with a sexy Mermaid the next. Pez also was joined by her girl pals, YouTubers Lucy & Lydia to complete her Mermaid squad. #goals

5. She’s handled a public breakup like a boss
'It was horrible, the worst time of my life. A four-year relationship, two-year engagement ended by a simple text message,' Perrie famously said of her break-up with former One Direction singer Zayn Malik. The very public break-up took a toll on the songstress, with her saying, 'For a normal girl to go through something like that it’s hard. I think when the whole world is looking at it and talking about it, you feel a bit (affected by it).' It wasn't all bad news however, her heartbreak inspired the newest song to belt out in between fits of tears and copious amounts of chocolate (following Taylor Swift's We are never, ever getting back together, of course). Equal parts cathartic and empowering, Shout Out to My Ex is everyone's new breakup anthem.

A Weekend In Shanghai

Dreams do come true: 10 celebrities that have marr... 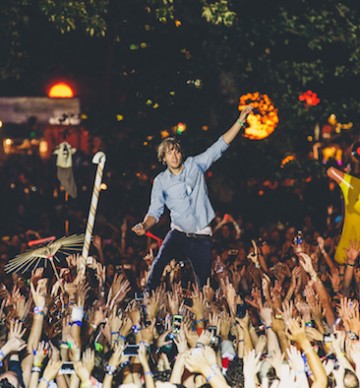 Remix on Record: Our Interview with Phoenix