Call them opportunists, thieves, delinquents, or a sufferer of Celebrity Worship Syndrome (CWS - yes it is a real thing), or all of the above, the infamous Bling Ring are back for 2017.

Responsible for pocketing more than $3 million cash and belongings from celebrities such as Paris Hilton, Orlando Bloom and Lindsay Lohan, the original Bling Ring was a group of burglers who target the rich and the famous.

The group consisted of eight teenagers who robbed over 50 homes between October 2008 and August 2009. Although their reign was short, it was most definitely sweet. They even have a film about their infamy, starring Emma Watson who played a character based on the real-life teen Alexis Neiers, who was only 18 at the time of the crimes.

Although their crimes were serious and resulted in major consequences, the millennials did employ some pretty tech savvy skills to plot their robberies. The Bling Ring used Google, TMZ, celebrity Twitter accounts and Good Earth aerial photos to track the locations of their victims and needless to say, their hard work did not go to waste.

So it may seem suspicious that multiple celebrities have been targeted in the few short months of 2017 alone. The original Bling Ring may not back in business, but could another similar group be responsible for the recent robberies?

Here is a list of burglaries that have happened in the past few months:

2. Kendall Jenner: March 2017
Jenner called the LAPD at 1am after noticing that items in her Beverly Hills home were missing. Over $200,000 worth of items were stolen.

3. Nick Young: March 2017
This is not the first time L.A Laker star, Nick Young, has been robbed. After the first time, Young locked everything valuable up in a safe. Unfortunately, this time the thieves stole $30,000 in cash, gold chains and the safe.

4. Alanis Morissette: February 2017
Again the safe was stolen. The singer reportedly lost $2 million worth of jewellery.

5. Nicki Minaj: February 2017
According to TMZ, Nicki returned to her house in a vandalised state. Her clothes were chopped up and pictures were drawn on and she lost $175,000 in jewellery.

6. Derek Fisher: January 2017
The former NBA player lost 5 of his championship rings which he won while playing the L.A Lakers. Some things, money can’t replace.

Although it is uncertain if there is a new group of money thirsty thieves out there, it is suspected that all these robberies are organised crimes. Eek. 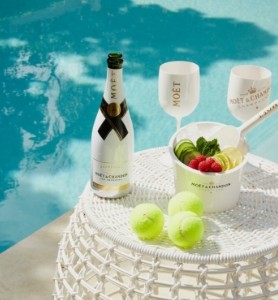 Moët & Chandon Racquet Club is the place to be at ...