Hailed internationally as the founders of modern electronic-alternative rock, Phoenix have continually inspired new generations of music-makers to step outside the bounds of traditional genres. From electro-pop, rock, and alternative new wave, the band has refused to stick to one comfortable way forward. Their ever-evolving sound has set Phoenix apart, and earned the four a large and dedicated following. The French natives have witnessed huge success in their 18 years together: from their Grammy win for Wolfgang Amadeus Phoenix, to their Spotify success (over 3 million monthly listeners!), and the mass critical acclaim for their most recent album, Ti Amo.

Phoenix are well known for their upbeat, fun and quirky tracks like'1901'and 'Lisztomania', but their newest creation hints at a deeper and darker side of the band. Ti Amowas conceived in the midst of Paris in terror, which undoubtedly seeped into the creative process. Frontman, Thomas Mars, filled us in on the need to bring light to dark times, unconscious music making and the importance of patchwork influences.Phoenix will be performing in New Zealand for the first time at Auckland City Limits 2018, to a wave of faithful and patient fans. We sat down with Thomas Mars, to talk about the band's upcoming kiwi gig, the new album and the future of Phoenix. 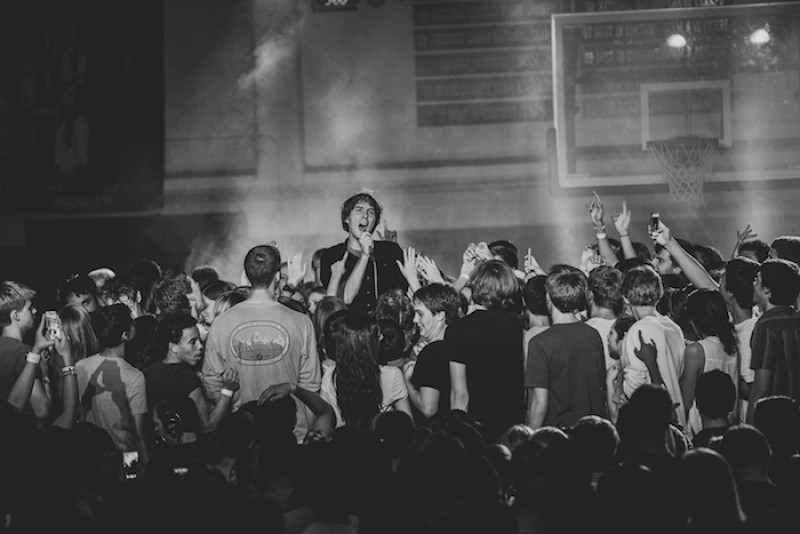 Have you been to New Zealand before?

No it will be my first time! Some of the band members have toured Australia, and they went to visit New Zealand a little bit, but I wasn’t part of that so I missed that trip. So we’ve never played, which is a very rare thing nowadays - for a band with a lot of records to play in a place for the first time. It’s something that we really enjoy. We played in Peru last week; it was the first time we had ever played with all this music. It's really fun because when you make the set list, there’s a point of randomness with which songs you pick. Because no one has ever heard anything; so its really rare and exciting now.

What do you already know about New Zealand? Do you have ideas of what the country is like?

I have friends that are from New Zealand, and they show me a lot of pictures. It seems to be very picturesque. They are on their phones more than I am because they have pictures to show me. I am very excited! I wish we had more time that’s the only thing. It seems to be an incredible place to visit, but I am really excited to play music. For me, that’s the best way to be like a tourist; to feel like you have a purpose and to play music. It’s really special to play for the first time, it transcends the rest.

You’ve played at some pretty amazing festivals like Coachella, Glastonbury, Bonnaroo. But where was the best crowd you’ve ever played to?

The beauty of touring and playing all of these festivals is not like ‘who is the best’, the difference is what they have in common that is overwhelming to me. Suddenly you can play in the Philippines and then in Argentina, and somehow these people are connected. And that’s the beauty of it. That’s what is overwhelming, more than the subtleties of how a crowd reacts, which is interesting too; but it is what they have in common that is the overwhelming thing to me.

So Ti Amo is the most recent album, which has received rave reviews with many people saying it’s a much more joyful album. Can you run me through the creative process with this album, what was different this time around?

It comes from a dark place and that’s what makes it joyful. I would say Bankrupt! was also a dark record because it was driven by fear a little more. I think once we had a big success with Wolfgang Amadeus Phoenix, you have this creative shield that you build around yourself.

And success allows you a new form of ambition that you have in your music, and you feel like people will follow you because you have their attention now. You can go in those weird and dark places. But there’s also a fear with the success that you have to keep this up. But we knew that we didn’t want every record to be like Wolfgang Amadeus Phoenix; we didn’t want it to be all the same. So Bankrupt! was driven by fear, and somehow that fear transformed into some sort of light. Some sort of light through the dark times in Paris in 2014, when we recorded the album, which was during all of the attacks. It was a weird feeling there. So I think everyone needed their own way to cope with it and find some sort of light; something lighter and joyful and hedonistic. Was it a conscious decision to make something lighter from dark situations, or was that something that happened along the way? Nothing is conscious. We learnt that from an early age. We learnt that what kept the four of us together, what kept our interest, was to have this chemistry, this unconscious chemistry between the four of us. Whenever we would come with statements or something that was pre-written before, that wasn’t a real force, it didn’t work. It didn’t create something interesting. It was all a bit of a cliché: we were coming up with things that other people had already come up with. The unconscious worked. We recorded a huge amount of music over and over and over, and then we would pick a few things here and there and that would help us to make things that were awkward and unique. So for this we went more for that direction.

There's a definite Italian pop feel to the latest album. Did you have any other influences for Ti Amo?

The Italian influence came from childhood and early music. And also from fantasy and an idealised version of lost paradise. Something that doesn’t really exist. The four of us will have to agree on a definition. And for the rest, sometimes the influences aren’t really – I would have to go so much in detail and go through track by track because every little thing makes me think of something. But what we like is that the influences come from all over the place and in the end it becomes a really strange patchwork. When we started the band, whenwe were in High School, you had to listen to just one kind ofmusic to be part of a group. Andwe were frustrated with this right from the beginning. On ourfirst record there’s a songcalledFunky Square Dance. It has a heavy metal guitar solo, a drum machine, a saxophone, a square dance part. It was all of these things together that made us enjoy music together. 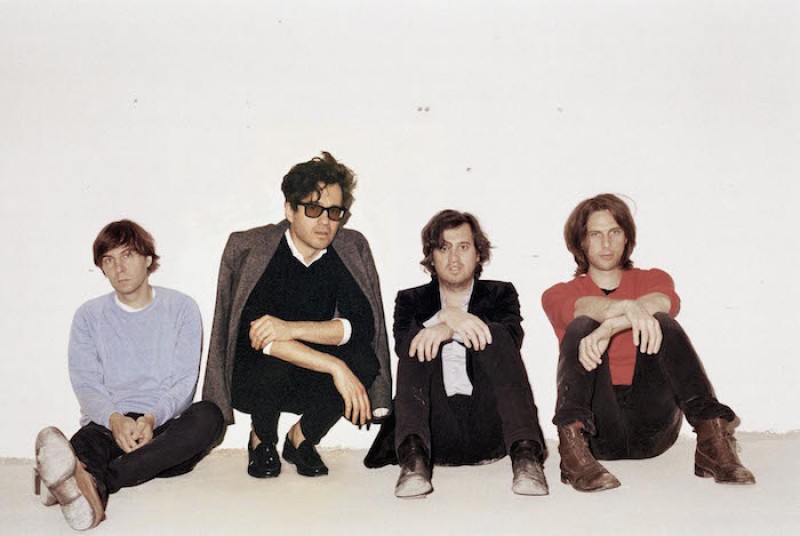 What is your earliest memory of music and wanting to make music?

That came early, I can’t remember how early. I remember there was a 70’s vinyl that my parents had that was from a French singer called Alain Souchonand there were 2 songs Ireally listened to. To me it was like candy, it wasn’t like music, it was tangible. It was like there was something about the sound that was extremely comforting. So that was an early memory. But then right from the start, I started playing drums and when you play drums there’s nothing more sad than a drummer by themselves. You watch those tutorials of drumming, and they always make me sad, no matter how incredible they could be. Just when I see a drummer playing by himself it's sad. So right from the start we played together; we existed as a band immediately. When we started, we were pretty lazy and punk about it in that we didn’t really want to practice. We wanted the instant gratification of playing music together; we wanted to go straight to song-writing together. Wewanted to produce records,and make something together and not just practice forever. At the time, that was what we were rebelling against. There were a lot of studio musicians growing up in Paris. The music scene was not existing, and it was mostly what we called ‘Studio Sharks’, which were mainly studio musicians. They were people heavily skilled, and if they 'made it' they would play on a Tina Turner record. That was the highest - that was the holy grail - to play guitar for Tina Turner. And that was not something we could ever relate to growing up.

To avoid falling to the same fate, were you constantly looking to do something that would make you a little bit different, or was that something that just happened in the process of making music as a group?

That came naturally because we came at an awkward time where we could make music in our bedroom. We had the equipment to make records in our bedrooms. So we got really into recording. But we were also strange because we were a band, but we had electronic equipment and so we were not really considered electronic music, like Air and Daft Punk, like these other men. But at the same time, we didn’t really belong to another band because we were doing multi track and working with samplers and drum machines. And we never really paid attention to this but it’s the people who do: if you played somewhere in the Mid-West they would say "well there’s a synth on your record so it is not rock or pop". It is people who try and make you fit into those spaces, and we just were grabbing every influence, just like we were grabbing every instrument. Sometimes you have no other choice than one synth, so the baseline is going to be on that synth because you don’t have a bass, and it's as simple as that.

What can we expect from Phoenix in 2018?

We will play shows in 2018 but I don’t know when we’ll stop. Somehow we keep playing shows until we perfect the songs. It takes us a while to get them to the place that we want them. And then, when we’re there, we usually have a few more shows until we get bored and then we stop. So I don’t know how long that will be, but the nice thing is that the songs dictate their own. Without sounding cheesy, we’re just trying to find out what they want to tell us. Sometimes the songs that you record, have their own life, and you realise when you play shows how they can change and combine. So it’s a world of possibility that is entertaining. And for the live show, when we were making this record we were thinking about how we should present the songs right from the beginning. From the beginning there was a strong visual identity with the record. We’re excited to bring it to New Zealand, because it's so satisfying to travel and show how we envisaged the record and how it should be played live as a production, and as a whole theatrical experience. Which is really satisfying when it works.

Our chat with Elle Fanning: The 'Maleficent' star ...

Every artist to get excited about at St. Jerome's ...