I was already a fan of Khalid but after seeing him live, my appreciation for his insane vocals is on another level.

The evening begun with Khalid’s support act - 14-year-old Australian singer Ruel taking to the stage and he successfully amped up the crowd for what would be a hectic 70 minute performance from Khalid. After launching on stage with tour title track, American Teen alongside a full band - he was soon joined by his two ‘American Teen’ cheerleaders.

He announced to the audience that although it’s his first time here, ‘it already feels like home’. Khalid’s breakthrough track, Young, Dumb and Broke did after all go number one here first before anywhere else in the world (which he didn’t forget to mention during the evening!).

Khalid’s popularity in NZ was no secret, especially after he needed to upgrade to Spark Arena after he sold out his original Auckland Town Hall date in 10 minutes when it was announced back in August but nothing really prepared anyone for the high level of decibels reached from the crowd singing back every single word.

I have to take a moment to mention Khalid’s electric stage presence coupled with his effortless
dance moves - we’re talking high scissor kicks and all - made for a soulful performance. His emotions and how he genuinely just wanted to share his music with everyone was on full view.

The 19-year-old really showcased his vocals in an acoustic version of Hopeless before launching into ballad track Coaster followed by Shot Down, which he introduced as a massive ‘f*** you’ to his ex. The arena was soon full of cellphone lights as Khalid dedicated his beautiful tune Angels to a close friend he’d recently lost back home.

The evening felt like we were well engrossed in Khalid’s American Teen world, so it seemed fitting that he introduced his birth place, Texas before firing into Winter - “I’m bringing the 915 to you guys.”

Perhaps one of the most anticipated tracks that night, Khalid asked the packed audience if they knew his collaboration with Marshmello - the crowd erupted shouting the title of the banger, Silence. It became a little hard to hear him sing over his band and loud fans which didn’t go unnoticed as he exclaimed, “that’s the loudest I’ve ever heard that song.”

As the night drew to a close and the encore chant exploded, Khalid didn’t keep his kiwi fans waiting for long, running back on stage to perform his Calvin Harris and Future collaboration, Rollin. Perhaps if Lorde didn’t have a show on the same evening and we might have seen a little Homemade Dynamite (Remix) - cause that’s what dreams are made of!

There was only one tune left on his last show of the tour and it had to be the one that was produced by kiwi Joel Little, Young, Dumb and Broke. As the confetti cannons bursted blue, white and red all over the arena during the last hook, it was obvious this was the beginning of Khalid’s musical journey and I can’t wait to witness what this wonder kid does next. 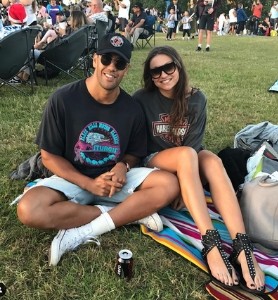