Academy Award winner Tilda Swinton never fails to deliver a captivating performance. Her portrayal of The Ancient One in Marvel's new film, Doctor Strange, is no different.

Below, the hyper-talented actor discusses the film. Check it out:

To be invited to join the Marvel Cinematic Universe is a good day for me. That’s a family I am so happy to play with. And then The Ancient One was irresistible. I didn’t know the Doctor Strange world. But the way it was described to me was just tantalising. I couldn’t wait to see this film.

Did they give you tidbits about the character?

They showed me the comics and I read the origin story of Doctor Strange. You get a good idea of what it’s going to be and it’s a really good one.

What do we know about the Ancient One?

We learn fairly early on in the story, when Strange is curious about the Ancient One, that she is Celtic and is of a completely indeterminate age. Nobody knows The Ancient One’s name. No one really cares; they just accept and revere this unique being and go forward. There’s a kind of joke around Kamar-Taj that nobody really knows anything about the Ancient One. She simply is.

What is The Ancient One’s look?

With The Ancient One, we wanted to go for something very fluid, very sort of non-specific and pure and ageless. That doesn’t mean either young or old; it just means ageless.. So we ended up going for something pretty raw and simple and modern and that has kind of an archaic feel too.

Tell us about your costume?

Alex Byrne has worked with Marvel for a long time, so it was fascinating for me to step into the world because she knows very well what relationship we have to that broader universe.

Did you do research?

About becoming very ancient and very, very wise? Not so much! I thought about what it would be like. It’s quite a chunk of change to be someone who’s bottomlessly wise. It made me think of a kind of lightness; that to be really super flexible and relaxed would be the way. But it wasn’t about research or anything. That was just thinking about it when I was on a walk one day. It wasn’t any more exotic than that.

Was there any training for the movements?

We worked with the phenomenal Marvel stunt team and a group of mega martial artists as well as with Julian Daniels who taught us hand movements: the extraordinary ‘tutting,’ of which he is a celebrated master. It was like being at a most delicious school. We were learning all these things that we would never otherwise have learned. You want to do something that draws on certain disciplines or certain traditions but at the same time you want to do something that’s never been done before. You want to make it original and the fight directors have done an extraordinary job of creating a particular style of fighting that only people who have studied under The Ancient One in Kamar-Taj will know.

Was this being different from other Marvel films the reason why it was appealing to you?

Honestly, I think I would’ve been happy to have been invited into any Marvel film, but this one is something else. It is introducing us to another world entirely.

It’s about the mind and our capacity to affect our reality with our thoughts. It’s about bending things; it’s not about breaking things. What I find so inspiring about Marvel is that they tend to be pretty experimental as filmmakers. They’re always taking technology right to the edge and beyond the edge. Regularly they’re inventing new technology to do things that a year ago they wouldn’t have been able to do.

I find that really exciting because I’m such a bit of a tech nerd when it comes to filmmaking technology. The visual effects team on this is truly out there; they’re from another planet.

Has this been the largest effects film you’ve worked on?

In fact, the few studio films that I’ve been a part of have all been visual effects films. They’ve all, therefore, felt like experimental films to me. They don’t ever feel much different in spirit to the experimental films that I was making in the ’90s with Derek Jarman when we were blowing Super 8 up to 35 mm, shooting in front of homemade blue-screens. This is just the next generation of that. It’s an environment that I feel quite comfortable in.

Why is Benedict Cumberbatch perfect for Strange?

Benedict has got the brains and the wit to know how to play—as we know from his great Sherlock Holmes—a really arrogant so-and-so, who you want to see brought down a peg or two. He does that thing brilliantly. Strange has a real enlightenment of the spirit in this film and I think Benedict really loved approaching that; it was a personal kind of pleasure for him to go on that journey. I think he’s just excellent casting and he looks pretty great in that beard and cloak, which is a really important thing, let’s face it. 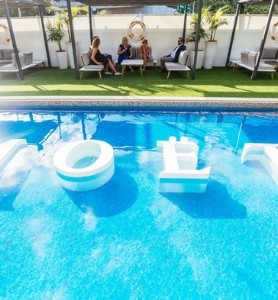 Out and about with Moët at the ASB Classic

Moet Amongst The Stars