On 1 December 2014, Charlie Tredway came out of the closet in a different way. ‘It’s World AIDS Day,’ Charlie posted on his social media pages, ‘so what better time to finally be honest and upfront about it. My name is Charlie and I’m HIV positive and I’ve never been healthier in my adult life.’

It took Charlie 9 years to openly declare that he was HIV positive, but since then he has never looked back. He has worked with the New Zealand AIDS Foundation to inform and prepare people in our community, and was also a board member for Body Positive Inc.

Charlie is no longer afraid to speak out about his illness and urges people to be more open. Two years before receiving treatment, the 32-year-old was repeatedly hospitalised for AIDS-related complications. Receiving treatment should be the choice of the individual, but Charlie encourages all HIV positive men and women to receive treatment quickly.

Charlie is now much healthier and things are looking up. He spoke to Remix about the stigma surrounding HIV/AIDS in New Zealand and what we can do to combat it.

In New Zealand we've always had a comparatively small epidemic due to our size, location and our healthcare system, and our historically strong stance on social justice issues which has contributed to low HIV rates. The problematic flipside of that is because of our low rates of HIV it just isn’t in the public eye, it isn’t discussed and it doesn’t seem to be a government priority.

What are some of the most common misconceptions you see or hear around HIV/AIDS?

As a person living with HIV it sometimes feels like we're behind the curve when it comes to attitudes and awareness around HIV. Misconceptions that I’m dirty, unclean or a lesser person not deserving of dignity are still out there. There is the perception that I’m sick and dying or a boogeyman out to pass on the virus and this attitude is not only hurtful, but is counterproductive to the HIV response - and not based in reality.

How do you think New Zealand needs to improve and what are the first steps we need to see in our community to make that happen?

I know it sounds like a bad political slogan to say, ‘We have all the tools we need, but we have to work together,’ but that doesn’t make it any less true. We will never get to zero transmissions with apathy, and so education and involvement and investment from the government are really important. It's why I'm so incredibly public about my status. HIV stigma dies in the face of knowledge and conversation. By putting a face to HIV and making personal the educational side of HIV, I find that the progress in attitude changes are more tangible and less removed.

A huge barrier for people finding out more about HIV/AIDS and getting tested is fear, right? What would you say to anyone reading this who is afraid to visit a clinic to get tested or has questions?

I tell people that the fears and apprehension around both discussing this stuff and getting tested are perfectly natural and human, but knowledge is power and that holds true for sexual health as well. The process is safe and quick and can be as anonymous as you need.

Peace of mind and taking control of your health is really important not just for yourself but also for other people as well. Whatever the outcome, there is support there and there is a way forward. It truly is better to know.

Where would you point people for more information?

The New Zealand AIDS Foundation website is incredibly comprehensive, with information on the HIV landscape in New Zealand and the services available, so that's a really good place to start. If you've been recently diagnosed or are living with HIV then there are amazing organisations like Body Positive, Positive Women and INA to support you. If you're an organisation or an employer, then having a speaker from the Positive Speakers Bureau come to share their personal story on what it’s like to live with HIV is always a really powerful and beneficial educational tool. 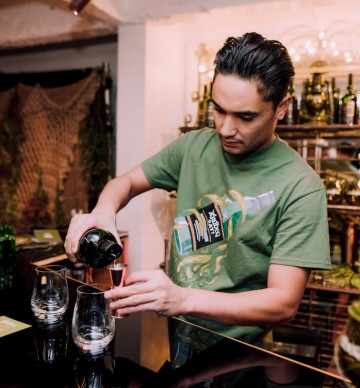