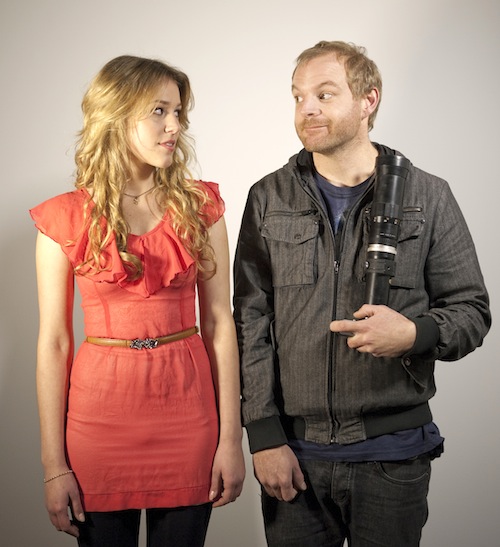 Quirky new comedy 'How to meet girls from a distance,' is hitting cinemas this coming Thursday. Sophie Donovan caught up with the film's leading lady, Scarlet Hemingway, who plays love interest ‘Phoebe,’ about her first feature film and her experience on the Wellington based film set… Hey Scarlet, tell us a little bit about your role in ‘How to meet girls from a distance?’ Oh Phoebe! She's super nice, pretty open and a little bit broken. How did you go about playing Phoebe? did you find it came quite naturally to you? I think it did actually, with everything she goes through in the film I felt like I could bring some humanity to it. She’s pretty open. She feels, and gets hurt but lives life in an optimistic and open way. The trailer for the film is pretty funny, what was it like on the set of the film? Did you guys have a great time? It was so much fun! The team had done loads of projects together before and they were such a hilarious bunch of people that knew each other really well. It was really funny watching all the team dynamics. Was there a lot of ad-lib on set? Yes especially between the director and Richard (who plays 'Toby' the film's protagonist), they had worked with each other so much they were used to giving each other crap. It must be pretty inspiring seeing that sort of stuff happening in comedy? Yeah it was great and it definitely helped me to relax into it. It was always fast paced so you need to be on the ball all the time. How did you come to land your roll in the film? Initially I was auditioning for just a small, quirky role as a landscape designer. So I trundled off to the audition thinking landscape gardener so I rolled up in a floral dress and they were like 'oh she’s a nice girl.’ Then they asked me to read for Phoebe as well and I got a call back and the rest is history. I sense a bit of an accent in your voice, you live in New Zealand but where are you from originally? I’m from England, my mother is English and my father is a Kiwi. I was born there and lived there until I was 11 years old. Then my whole family immigrated here. Where was the majority of the movie filmed? In Wellington, they got some really good shots of it in the film, it’s a really nice city. What did you learn during your experience on the film set? I learnt so much! To not drop the ball was the most important thing I learnt when filming at such a fast pace. You really couldn't let your energy drop, and then when you did it was bad! What’s your favourite moment in the film? When I watch the film back it’s the same moments as when i first read the script; anything with Carl in it who plays the therapist. All of his scenes are wet your pants funny. I remember laughing reading the script thinking, if they cast this right, it is going to be so funny… and they really, really did. Did you have any scenes with him yourself? Not really, which is a shame. Just a final scene where all the characters come together and it’s all exposed and hilarious. But not much actual connection between Phoebe and Carl sadly. How did you get to where you are? How did your acting career start? It was one of those funny things, it’s been quite a surprise. When I was a kid I thought acting was brilliant I wanted to do that, and then you know life gets a bit serious and you try all sorts of other things. Then a few years ago I thought 'I’ve got to give this a try.' I did some independent stuff just to test the water and then that seemed to go alright so I thought, right! I’m going to get an agent! I found an agent and he was also an acting coach, so he coached me and got me to the point where I could get a role in a film. Is this your first film? This is my first feature, so up until then I'd done short independent films, which was nothing in comparison. Hopefully this becomes the beginning of more things as I really loved it. So who inspires you within the acting industry? I don’t know if I’m as inspired by actors as much as I am by directors. People like Tim Burton, who can pull together quirky actors like Jonny Depp and all of his famous crew and create something amazing. What are your aspirations off the back of this film? I’d just like to do more acting! The ideal would be to carve a niche for myself. You know all the best end up finding out who they are as an actor and create their own thing. So that would be the ultimate. Do you have an idea of what kind of actress you want to be? Whether you want to stick to comedy or whether you want to try your hand at a few different things? I’d like to give all of it a go; drama, comedy, action even horror. Eventually I want to have a quirky mix!

The Royals are hiring!