Internet sensation Cameron Dallas opened the show, wearing a bejeweled crown to cement his latest accolade as fashion royalty. Also on his CV? A whopping 17.4 million followers on Instagram, 5.2 million on YouTube, as well as his own Netflix show aptly titled Chasing Cameron.

Hot on his heels was Cindy Crawford's genetically blessed offspring - Presley Gerber. His second menswear season in a row, there's no doubt he'll be one on our radards for quite some time.

With stars in their eyes and bright futures ahead, it's easy to see why Dolce & Gabbana chose some of the millennial generations hottest rising stars to showcase their designs.

Check out our favourite looks below:

New Issue Preview: A Sneak Peek Into Our Shoot Wit...

Come with us to an exclusive adidas bash to launch... 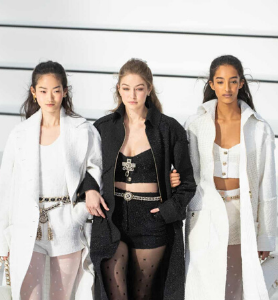 Our favourite trends from the Fall/Winter Paris Fa...